San Paolo Albanese is the smallest commune in  Basilicata with an area of 29.9 km2, and little less than 330 people. At an altitude of 843 meters, San Paolo Albanese was founded in approximately 1534 by ethnic Albanian refugees during the invasion from Greece by the Turks. Surprisingly, even after Italy’s unification, the Arbaresh language is still spoken in that region today.  Elena, proud owner of the only restaurant of San Paolo Albanese, speaks to her sister over the phone in Arbaresh.

It seemed as though we walked directly into someone’s home not in a restaurant. The kitchen was tinny and so was the dining area, which might seat maybe 20 people  on a full night. We were warmly greeted with a table decorated with freshly baked sweets and home cured meats and breads as well as sauces and marmalades jarred in bottles.

Elena fed us “il piatto dei vacanti”, the nomads’ meal. One might call it a rustic version of the québécois “coureur des bois” breakfast. This was something I had never seen before. Apparently, due to its isolated geographic position, virtually no one had store-bought food. This dish was one for the unexpected visitor and mostly for those who were travelers in need of hardy food, knowing not when their next meal would be.  “Il piatto del vacante” consists of a fried egg, a piece of home-made and locally cured sausage, “cotica”, a thick slice of cured local bacon and fried “pepperoni cruschi” on the side.

A dish that would make even the tough vegetarians think twice before passing up such an opportunity to sooth the soul, which says ‘welcome home’ wherever your home might be.

As we finished our meal and took the last sip of home-made red wine and set out to our next destination, Chiaromonte, about 50 km from where we were. Technically it shouldn’t have taken us too long to arrive- that’s if we hadn’t stopped several times to take in the scenery. We succumbed to the attraction of the breathtaking moments in just the perfect natural light. 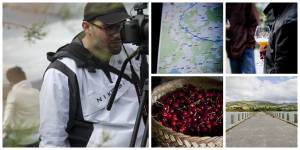 Our car barely squeezed between two others and made it to the top where at least 15 men from the village greeted us and led us into a dark man-made ancient cold room, a “cantina” carved right into the rock that served to preserve food in the past and is now being used as a get-together for the villagers -mostly men- to eat, drink and have fun. I have never seen anything like it. Chef and host Pasquale and friends had turned the cantina into a  trattoria– buffet, where cured meats, fresh bread, pizzas and foccaccias made with local spelt flour, were beautiful laid out for us to indulge in. And yes, there was more to come. These were appetizers, not the recipe I was called in to capture.  As Pasquale explained: “today I will divulge the secrets in my invented pasta dish:  “Gnocchi con tartufo e fondue di formaggi” Gnocchi pasta with truffles and cheese fondue…. “O Dio” I said and that wasn’t all, a few other friends decided to show us how to make “frittelle al sambucco” a thin omelet perfumed with sambuco flowers freshly picked just moments before adding them to the mix.

As a bunch of burly men bonded while cooking, quickly the divine smells emanating from the rocks attracted more villagers into this cold room, which was now getting very warm. The chaotic environment made it more challenging to film and keep control of the situation but I allowed the natural course of events to follow its flow.